The Cronulla Surf Life Saving Club building redevelopment project was started due to the needs to modernise our Club, to make it more efficient to use, to improve the facilities for members, to make it comply with current building and safety standards and to ensure that it will meet our needs into the future.

Our Club was formed in 1907 and the first Clubhouse was a tram on the beach. The current Clubhouse was opened in 1940, added to in the sixties, seventies and again in the mid nineties when the Purcell wing was added.

On Thursday 30th June 2016 the Club lodged a Development Application (DA) with Sutherland Shire Council for the refurbishment and development of our Clubhouse.

On Thursday 20 October the Joint Regional Planning Panel (Sydney East) held a meeting to determine the progress of our DA. This body is a state government formed group which makes the final determination on applications for major works on public buildings. The panel comprised three content experts pus Sutherland Shire Council representatives. The panel was briefed by SSC planning staff prior to the hearing. All relevant documents had been supplied. An SSC report had been submitted which supported the approval of our DA.
Verbal submissions were called for.

Two residents and a consultant engaged by the RSL spoke regarding the roof height and balcony canopy for the redesigned Monro Room. They were quite accepting and supportive of the Club’s needs and even a slight increase in Monro Room bulk but requested a reduction in roof height. One resident also spoke against the style of the Monro section as out of character with the building and heritage considerations. These comments were consistent with the written objections they had already submitted.

Angelo Korsanos (architect), Kirk Osborne (planner) and I also addressed the hearing. Angelo was questioned rigorously over the increased height and roof profile height in particular and the impact on view of any reduction in height.

A brief summary is that it was determined that the building style objection was unfounded and in contrast to SSC and ARAP observations and that the loss of view, while proven, was not of a significant nature. The SSC recommendation to approve the DA was endorsed.

On Friday 21 October a notice appeared on the JRPP website stating the application was approved.

The total cost of DA preparation was approximately $140,000.

A full QS costing has been undertaken. This places the cost at approximately $6,000,000 with some determination to be made on possible additional costs to do with primary services of water and power.

The Club has the following funds committed for the construction

Potential source of other funds currently being pursued include

Cronulla SLSC has a proven track record of successful financial management of building projects such as the Sports Complex, Purcell Room and Zimzala. There is confidence that the amount to be suggested to be borrowed can be repaid in a manageable and timely manner – not burdening the Club with either a large repayment schedule or excessively long term debt.

A Special General Meeting of Cronulla SLSC Members was held on Sunday 17th May 2015. At that meeting, approval was given for the previously developed concept design and for the Club Building Committee to proceed with all arrangements required to take the project to DA.

Draft plans were prepared and subsequently reviewed by the Club Building Committee through several stages of development and refinement. The refinements included mainly internal features. Some extended discussion was held related to:

In November 2015 the draft plans were at an appropriate state of readiness and a request for a pre-DA (PAD) was submitted to Sutherland Council. This process would usually take four weeks from submission. Delays resulted in a meeting being deferred until 13th January 2016.

At the PAD meeting the SSC Architect advised that a consultation process through the SSC independent Architectural Review Advisory Panel (ARAP) would be part of the PAD. This consultative meeting was ultimately held on 25th February 2016.

The reports from the PAD and ARAP were received close to the close of business on 15th March 2016. They did not contain any major issues. There were some recommendations related to the size and shape of the roof lines on both the existing southern and northern balconies

The reports were reviewed and responses considered by a group including the project architect, the consultant planner, the consultant heritage architect and Club representatives. Our response included changes to the plan based on some comments and retention of some features with explanation for their retention. A report was prepared to submit with the DA.

The submission of the plans for DA allows any issues, with primarily the external features, to be identified and considered for final modification.

Further tuning of internal features and layout can continue with little or no impact on the DA.

An architect was engaged by the Management Committee and concept sketches drawn up based on the design brief. There were discussions with a range of Sutherland Council officers who provided frequent review and advice.

The initial concept was presented to the Members and their comments and alternate ideas were compiled and considered. Some significant changes were then made to the concept sketches to arrive at the current proposal.

The concept and proposal has been developed in consideration of the heritage status of the building core and constrained by the limitation of staying within the existing footprint and vertical profile (height).

Requirements indicated in meeting and communication with SSC were:

Have we met these?

Assessment of the proposed concept against the design brief indicates that all key requirements have been met while retaining a respect for the history and culture of our Club and Clubhouse.

Additional to this, we have the support of Sutherland Shire Council who have described the concept as respectful of heritage, footprint and local impact.

Also, we have engaged a BCA consultant who has reviewed the concept and declared it as fully compliant for both BCA (building code) and DDA (disability/equitable). 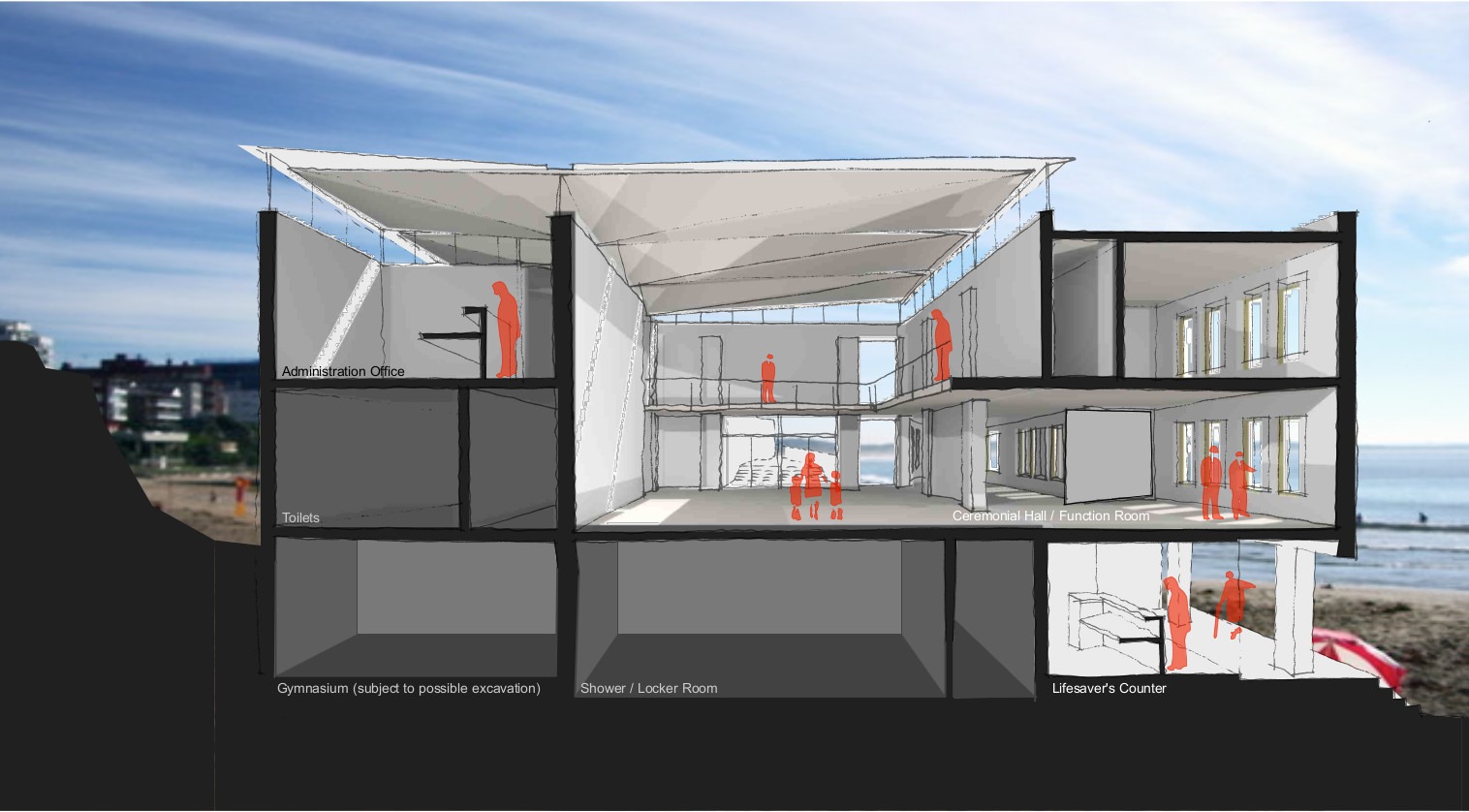 The building has many issues, not surprising considering that the core is 75yrs old and the newest part is more than 20 years old.

The dated facilities are inefficient and raise many issues.

The Cronulla SLSC Club House in the 1940’s

The ongoing or “life cycle costs” of building are within Club ability. This is demonstrated by the significant facility related costs serviced in recent years while maintaining a sound financial record and accumulating cash reserves.

The alternatives to a major rebuild of the Club premises are very limited and do not present very satisfactory mid to long term outcomes for our Club and Members.

If we do not rebuild/redevelop the premises then the current issues will continue and become more extensive, more difficult to address, and will make the Clubhouse a less usable place for our lifesaving, competitive and social Members and our wider community. Members will continue to use the facilities less and less. Ultimately, the building will increasingly deteriorate and will become unfit and unsafe for use.

This will eventually expose Cronulla SLSC (and SSC) to greater liabilities and will have a major negative impact on operation of the Club.